US orders more testing on Boeing 777 planes after engine scare 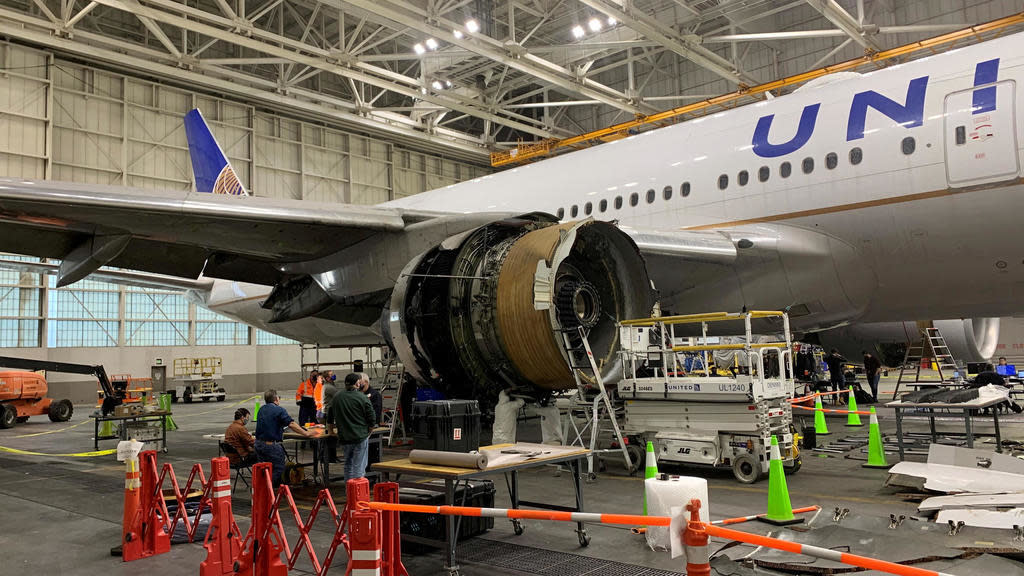 The US aviation regulator on Tuesday ordered a deeper inspection of the engines similar to the ones on a Boeing 777 aircraft that suffered a spectacular failure over Denver days earlier. The incident, in which a Pratt & Whitney engine burst into flames and scattered debris over a Denver suburb shortly after takeoff for Honolulu, led to scores of Boeing 777s being grounded worldwide over safety concerns. "US operators of airplanes equipped with certain Pratt & Whitney PW4000 engines (must) inspect these engines before further flight," the Federal Aviation Administration (FAA) said.

The regulator said it was issuing the order "as a result of a fan-blade failure that occurred Saturday on a Boeing 777-200 that had just departed from Denver International Airport." Before they can return to the skies, "operators must conduct a thermal acoustic image (TAI) inspection of the large titanium fan blades located at the front of each engine. TAI technology can detect cracks on the interior surfaces of the hollow fan blades, or in areas that cannot be seen during a visual inspection," it said in a statement.

Metal fatigue has emerged as the chief suspect in the engine failure, which caused no injuries. Steve Dickson, the FAA chief, had told an air safety town hall meeting earlier Tuesday that "we want to understand what happened and take the necessary steps to prevent a similar recurrence from happening." "We're fortunate there were no fatalities or injuries," added Dickson.

The near-miss over Denver was a fresh setback for Boeing, which only recently resumed deliveries of the long-grounded 737 MAX following two fatal crashes. It also raises fresh questions about the FAA, which was roundly attacked for its oversight of Boeing in the certification of the 737 MAX, and about whether maintenance was adequate on the plane, aviation experts said. Even prior to the Denver incident, US air safety regulators had been weighing stricter inspections on the jets and their Pratt & Whitney engines, US officials said Tuesday.

Story continues The FAA reviewed inspection records and maintenance history after a Japan Airlines fan blade incident on December 4 last year "to determine the cause of the fracture and was evaluating whether to adjust blade inspections," an FAA spokesman said Tuesday. The flight landed in Japan without injuries.

Following a February 2018 incident on another United jet, the FAA reviewed 9,000 fan blade inspection reports and issued an airworthiness directive setting new rules on inspections. Metal fatigue In a briefing Monday, the National Transportation Safety Board said it was too soon to know if the issue in Denver was similar to those in the Japan Airlines flight, or the February 2018 incident, which involved another Boeing 777 and Pratt & Whitney engine.

"A preliminary on-scene exam indicates damage consistent with metal fatigue," NTSB Chair Robert Sumwalt told the briefing. He said two fan blades fractured on the number two engine on the Boeing 777-200 on Saturday. One of them was later found on a soccer field, while the other remained lodged in the engine.

The NTSB plans also to look at the inspection record on the United plane to see "who knew what when, what could have been done and what should have been done," Sumwalt said. "Fatigue means that you can have a crack in the material and when you load it again and again, the crack slowly grows," said Robert Kielb, a professor at Duke University's school of engineering. "This is an example of an event where we learn something about the design 20 years after it goes into service, and then we immediately ground the fleet, figure out what's going on and fix it."

Headache for Boeing In the wake of the Denver incident, Boeing said all 128 of the 777s with Pratt & Whitney engines were grounded. Of the 128 planes, only 69 were in service while 59 were in storage.

Besides United, which removed 24 planes from service, affected airlines included Japanese carriers Japan Airlines and All Nippon, and South Korea's Asiana and Korean Air. On Monday night, a Delta Air Lines flight on a Boeing 757 en route to Seattle from Atlanta was diverted to Salt Lake City "out of an abundance of caution following an indicator warning of a possible problem with one of its engines," a Delta spokesman said. "The flight landed safely without incident and taxied to the gate without assistance."

Boeing only recently resumed deliveries of the 737 MAX following a 20-month global grounding after two crashes killed 346 people. The MAX began returning to commercial service in late 2020, with airline travel still depressed due to the coronavirus pandemic. Boeing executives said last month they expected it would take about three years for activity to return to pre-pandemic levels.

Michel Merluzeau, an expert at consultancy AIR, agreed the latest problem did not appear to result from poor plane design. "It's not really a problem for Boeing," he said. "It's more an issue of maintenance -- how United or Pratt & Whitney is maintaining engines that have been in use for a while." The episode "is an embarrassing headline, but as a practical issue, it will have no impact on Boeing," said Scott Hamilton of Leeham News, an aviation news site.