Kevin Estrada has been working all week organizing rescue operations and supply deliveries to the Fraser Valley flood area and is worried that could end today. Estrada, project director with the Fraser River Angling Guides Association, says members of the non-profit group have been running upward of 15 boats a day along the river, bringing people, pets and livestock to safety and delivering food and other supplies to people cut off from services.

On Friday morning, Estrada received an email from the Office of Boating Safety, the division of Transport Canada responsible for overseeing regulations and enforcing policies for recreational boaters, letting him know the federal agency will be placing an “imminent” restriction on all non-essential boating from flooded and evacuated areas. Transport Canada confirmed in a statement to CBC News that, as of Friday afternoon, non-essential marine vessel traffic is prohibited in certain flooded areas of B.C.

Essential boats are limited to municipal, Indigenous, provincial and federal government employees involved in emergency response, according to the email sent to Estrada. He says that decision could put people at jeopardy. 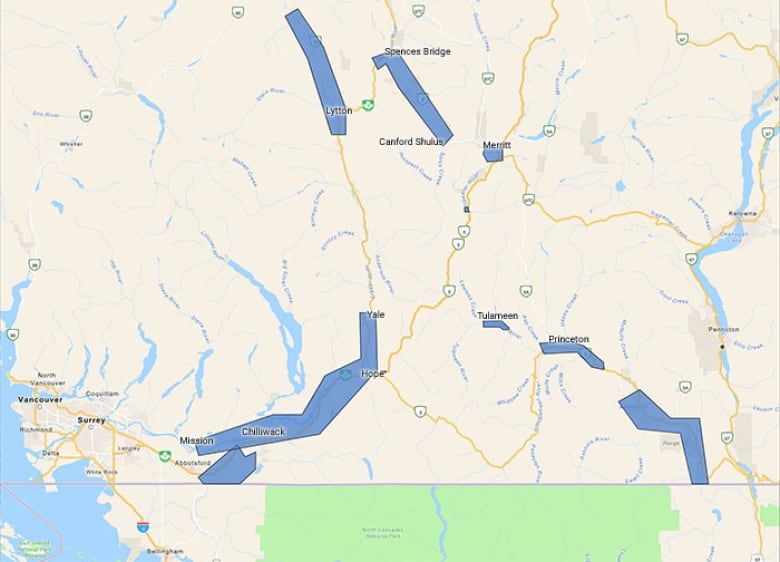 The areas around the province where non-essential boat traffic is prohibited is shown on this map. It encompasses most areas which have seen significant floods. (Transport Canada)

“The government does not have the capabilities to carry out the rescue and food supply deliveries that we could do, so until they can, they need to keep us in play to help the community,” Estrada said, speaking to CBC News from his Chilliwack office where he was organizing the day’s missions.

He said he does not yet know how to apply for essential status with Transport Canada, but has reached out to his local member of Parliament and will do what he can to keep his members and their boats in the water. 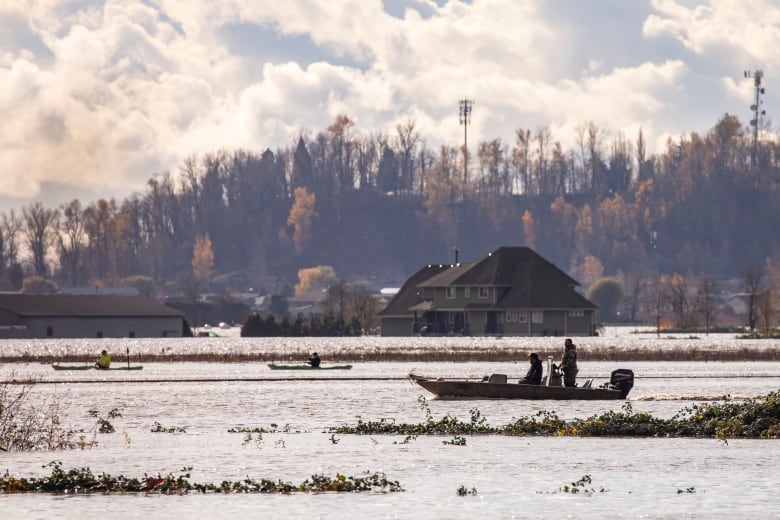 Kayakers and rescue personnel in a boat make their way through floodwaters on the Sumas Prairie area of Abbotsford, B.C. (Ben Nelms/CBC)

Angling association member Landon Gill has been on the water all week. On Friday morning, he was bringing Wendy Morrison by boat from where she was stuck in Chilliwack to Mission, B.C., so she could make it to a cancer treatment appointment. “It’s vital that I get there,” said a relieved Morrison. “How would I get there if it wasn’t for people like Landon?”

Gill said he has moved about 20 stranded people this week — either out of harm’s way or to connect them to critical services like medical appointments. Collectively, he estimates association members have already helped more than 200 people. 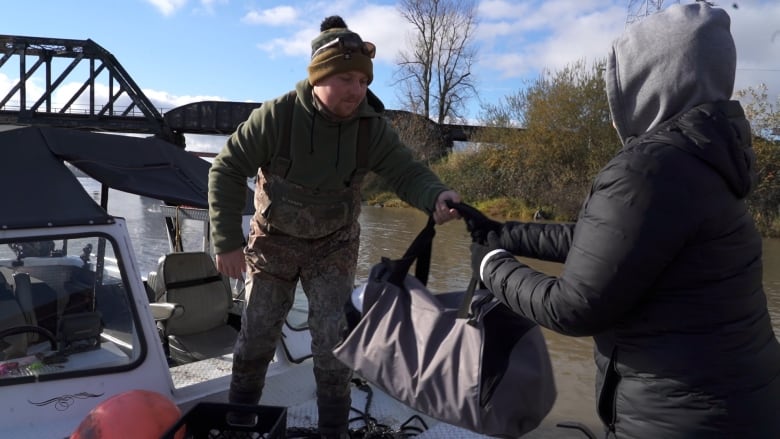 Gill helps Wendy Morrison off his boat at the Mission Harbour marina after taking her safely from Chilliwack for a cancer treatment appointment. (Gian-Paolo Mendoza/CBC)

A guide on the river for eight years, he said he knows the waterways inside and out and the idea he will have to stop helping people is “disturbing.” “We do this on the daily.

We are on the river always, so there are no safety risks to us out here. We are just trying to get people home and get people safe,” he said. According to the Office of Boating Safety, the order will be temporary and is intended to keep boaters out of danger and areas clear for emergency services to perform response operations.

Transport Canada said exceptions would be allowed for emergency crews and for those seeking to access personal property and that the order is meant to prevent the use of boats for leisure activities. “Volunteers who are involved in providing assistance, under the direction of a local authority, are also exempt,” the spokesperson said. Transport Canada advised volunteers to register with local authorities by providing their boat licence or registration number.

Registration is not required for those using a boat to gain access to their property or to access property on behalf of the owner. 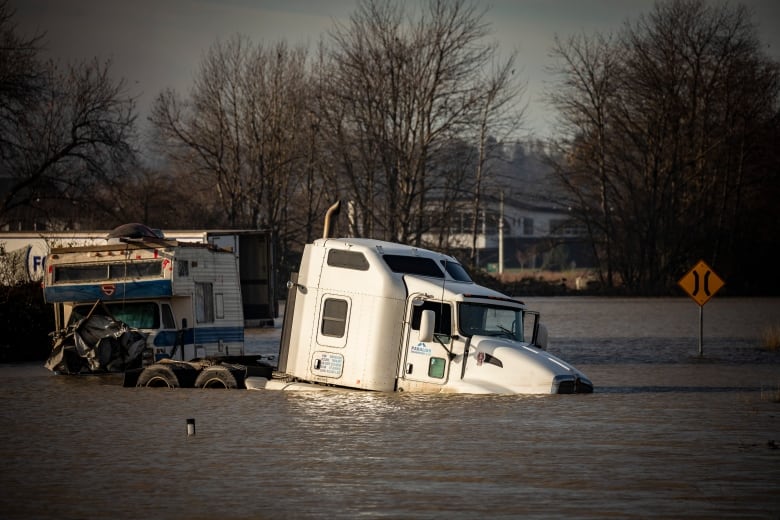 A transport truck and a motorhome are pictured on Highway 1 in the Fraser Valley on Wednesday. (Ben Nelms/CBC)

Estrada said the group of anglers, who are not receiving any government financial support for their efforts, are helping anyone who reaches out and are primarily communicating by social media. “I just sent another message to one of the guys saying there’s two cats up a tree they need out and that’s how we’re running this,” said Estrada, whose crews are racing the clock now. Thousands of animals have died as a result of the severe flooding that has devastated farmlands in southern B.C. over the last few days, the province confirmed Tuesday.

According to Prime Minister Justin Trudeau, 120 military personnel have been dispatched to Abbotsford, B.C., one of the worst-hit areas east of Vancouver, to help with flood recovery efforts.