I drove Ford’s F-150 Lightning. The revolutionary electric truck’s biggest superpower is how normal it feels. 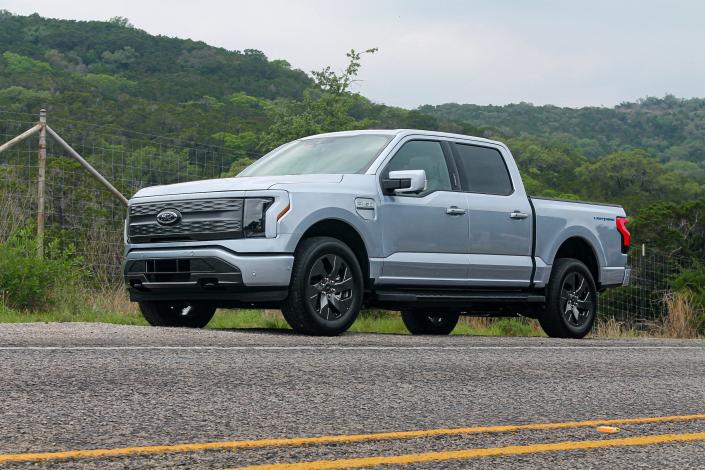 One year after Ford unveiled the F-150 Lightning to the world, the revolutionary electric pickup truck is finally on the road. And remarkably, it lives up to the hype. Relative to the century-old car industry, electric vehicles are still very much in their infancy.

And although billions of dollars are pouring into their development — and more people are buying them than ever before — electric cars still make up a paltry 3% of overall sales. Ford’s zero-emission, battery-powered version of America’s most popular truck is the vehicle that could finally launch EVs into the mainstream. The Lightning just entered production, and I tested an early model for a couple of days at a media event this month. For me, the truck was a home run — but perhaps not for the reasons you’d expect.

Yes, it’s packed with cutting-edge technology. It’s quick, can drive hundreds of miles on a single charge, and has awesome features you can’t get anywhere else, but what really makes the electric F-150 a winner is just how normal it feels. The 2022 F-150 Lightning is Ford’s first serious electric pickup truck and the third such model to hit the scene in the modern EV era, following the Rivian R1T and GMC Hummer EV. Ford kicked off production and deliveries of the truck earlier this year, beginning work on the roughly 200,000 refundable reservations it received.

The truck comes in four trim levels, ranging from just under £40,000 for a basic work vehicle (the Pro) up to £90,000 for a fully loaded luxury truck (the Platinum). XLT and Lariat models fall somewhere in the middle. A larger battery pack that increases range from 230 miles to 320 miles (as estimated by the Environmental Protection Agency) is available for an extra cost on the Pro, XLT, and Lariat. The Platinum comes standard with the upgraded pack and is good for 300 miles.

Ford wants to sell 150,000 Lightnings per year starting in 2023, and its familiar nature may be what seals that. Instead of dreaming up an outside-the-box model a la the doorstop-shaped Tesla Cybertruck, Ford took its already popular F-150 and made it electric, while taking care not to mess around too much with a winning formula. The result is a pickup that’s extremely cool and forward-thinking, while still being familiar and accessible. From the outside, the Lightning looks just like its gas-fueled twin, save for a closed-off grille (no engine cooling needed), sleek LED lights, and a charging port.

Its bed is exactly the same, meaning owners can slap on accessories they already use on their combustion-engine F-150s. Climb up into the Lightning’s cab and you’ll find an interior that’s also largely identical. The biggest outward difference is a larger touchscreen, which is 12 inches in the basic Pro and XLT models and a sprawling 15.5 inches in fancier trims. The cab is spacious, nicely laid out, and comfy — particularly in higher-end trucks, which get plush leather seating and all sorts of other bells and whistles.

That giant display is intuitively designed, with important functions displayed prominently rather than obscured behind a labyrinth of submenus. Along the bottom of the screen, Ford graciously provides a permanent row of climate controls that flank a physical volume knob. In some other tech-heavy EVs, basic settings like heated seats could be a few clicks away. Pulling away in the Lightning for the first time, I was surprised at just how normal it felt to drive.

To shift into drive, you use a hefty, old-fashioned gear selector, not some newfangled switch or dial. Like all electric cars, the truck is quick and quiet. But it won’t immediately rip your face off with its acceleration like some EVs do.

Some electric models make up for the lack of an engine rumble by pumping in artificial, futuristic noises, but there’s none of that in the Lightning. Likewise, many EVs use a process called regenerative braking to automatically slow the vehicle the instant you lift off of the accelerator, thus capturing energy and feeding it to the battery pack. The Lightning does a bit of that, but it basically coasts freely just like everyone’s accustomed to unless you specifically dial up the regen. It all means that there isn’t a huge learning curve to using the Lightning, particularly for anyone who has spent time in other Ford trucks. Contrary to how familiar it feels, the F-150 Lightning is far from ordinary once you dig a little deeper.

On top of all the standard F-150 traits, the Lightning offers cool capabilities and unique features that you simply can’t get on a gas truck. There’s the giant frunk, for example — the singular feature that made a focus group of skeptical Texan truck owners lose their minds back when the Lightning was in its early stages of development. Having experienced the frunk firsthand, I can see why. It’s big enough to gobble up four or five stuffed backpacks or duffels, and could come in handy for anything you want to keep in your truck permanently or shield from the elements. All Lightnings have all-wheel drive, as well as two motors that produce a whopping 775 pound-feet of torque and up to 580 horsepower combined.

So although neck-snapping acceleration isn’t necessarily what the Lightning is all about, it’ll happily deliver exactly that if you switch into Sport mode. Even after spending hours in the Lightning, driving something that felt so large yet accelerated so effortlessly never stopped feeling weird. Moreover, the Lightning accomplishes all of this with extraordinary quietude; surprisingly, I didn’t hear much road or wind noise until about 70 mph.

Another highlight of the Lightning: It has a ton of power outlets and can act like a giant mobile generator — without all the gasoline, noise, and fumes.

I witnessed the Lightning share its power with a mobile espresso bar, an extensive tailgating setup, and a Ford Mustang Mach-E SUV, which was pretty neat. Can the Lightning do truck stuff? Sure it can.

Ford says it can tow up to 10,000 pounds or carry a payload of up to 2,235 pounds. And since driving range is such a source of anxiety for new EV owners, the truck uses onboard scales to adjust range estimates based on how much one is towing or hauling. A 1,250-pound payload of mulch knocked the Lightning’s range by roughly 80 miles in my experience.

There’s no doubt that the F-150 Lightning will have to contend with the same mountain of challenges the rest of the EV space faces. Despite all the hype around them, most people don’t know the first thing about electric cars.

Charging infrastructure in the US is lacking, particularly when you get away from the coasts. And the Lightning is out of reach for a lot of people, starting at £53,000 for the cheapest model aimed at regular consumers. But Ford clearly put a huge amount of thought into every element of this truck.

And between its familiar feel, innovative features, tremendous capability, and uniquely electric driving experience, the Lightning has the potential to change a lot of minds — and perhaps even the landscape of our roads. Are you an F-150 Lightning owner or reservation holder with a story to share? Contact this reporter at [email protected]