A lorry driver has been fined after he was caught driving on the wrong side of the road.

Matthew Lobley, 46, was caught on dash cam as he overtook two cars in the face of oncoming traffic.

The incident took place on the A36 near Warminster on September 8 last year, shortly after 3pm.

In the footage, Lobley’s HGV can be seen coming down the hill in the direction of Bath and contravening the double solid white line to overtake.

Lobley, of Woodland View, Dilton Marsh, Westbury, pleaded guilty to failing to comply with solid white line road markings at Salisbury Magistrates’ Court and was sentenced on Friday (May 28), receiving a £155 fine and three penalty points on his licence, as well as paying costs.

Sgt Will Ayres of the Roads Policing Unit said: “White lines are incredibly important indicators on our roads to highlight when it is dangerous to overtake and it is imperative drivers comply with them. 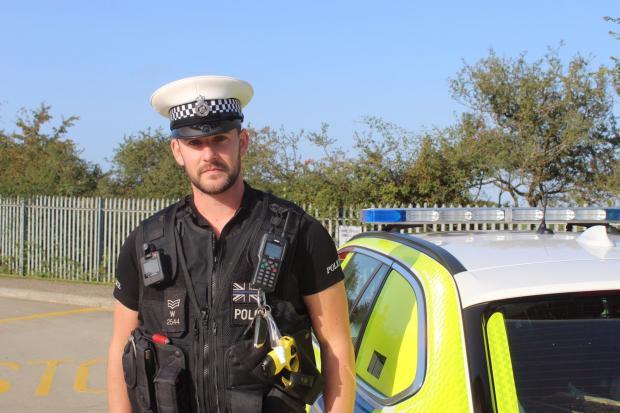 “This was the sight of a double fatal collision in 2018 following a breach of the white line system and drivers should be taking extra care.

“It is only through good fortune that this complete disregard for the rules of the road to be a couple of cars ahead in the traffic didn’t result in a collision or worse.

“You must not cross or straddle a white line. The only time this is acceptable it to pass a stationary vehicle, push bike, horse or road maintenance vehicle that is travelling at less than 10mph.

“I’d like to take this opportunity to thank the member of public who submitted the dash cam footage that enabled this prosecution and would encourage people to do the same if they have captured a crime or an offence being committed.”

Anyone who wishes to submit dash cam footage to Wiltshire Police should put it on a dated disc, and send it to the Criminal Justice Unit at Criminal Justice Unit (Traffic), Gablecross Police Station, Shrivenham Road, Swindon, SN3 4RB, ideally within 10 days of the offence being committed or online here: https://www.wiltshire.police.uk/ro/report/rti/rti-b/report-a-road-traffic-incident/[1].

It is important to point out that if you report an incident, you must be willing to give evidence in court and provide a statement. Police will not prosecute from the video alone, as we need to have evidence of the cause and effect of the incident.

There are publicly available documents from the CPS which detail what would constitute dangerous driving and careless driving, and it is recommended that these documents are read before submitting videos to police.

A Smorgasbord of Smaller Items from the World of Multimodal Transport

UK – FRANCE – It seems the pandemic which has had such a serious effect on passenger numbers travelling between the two countries has not been a problem for freight vehicles using the Channel Tunnel. In September 2020, Le Shuttle Freight carried 131,98…