Jersey: ‘deeply embarrassed by this nonsense’ – reactions to jingoism from papers 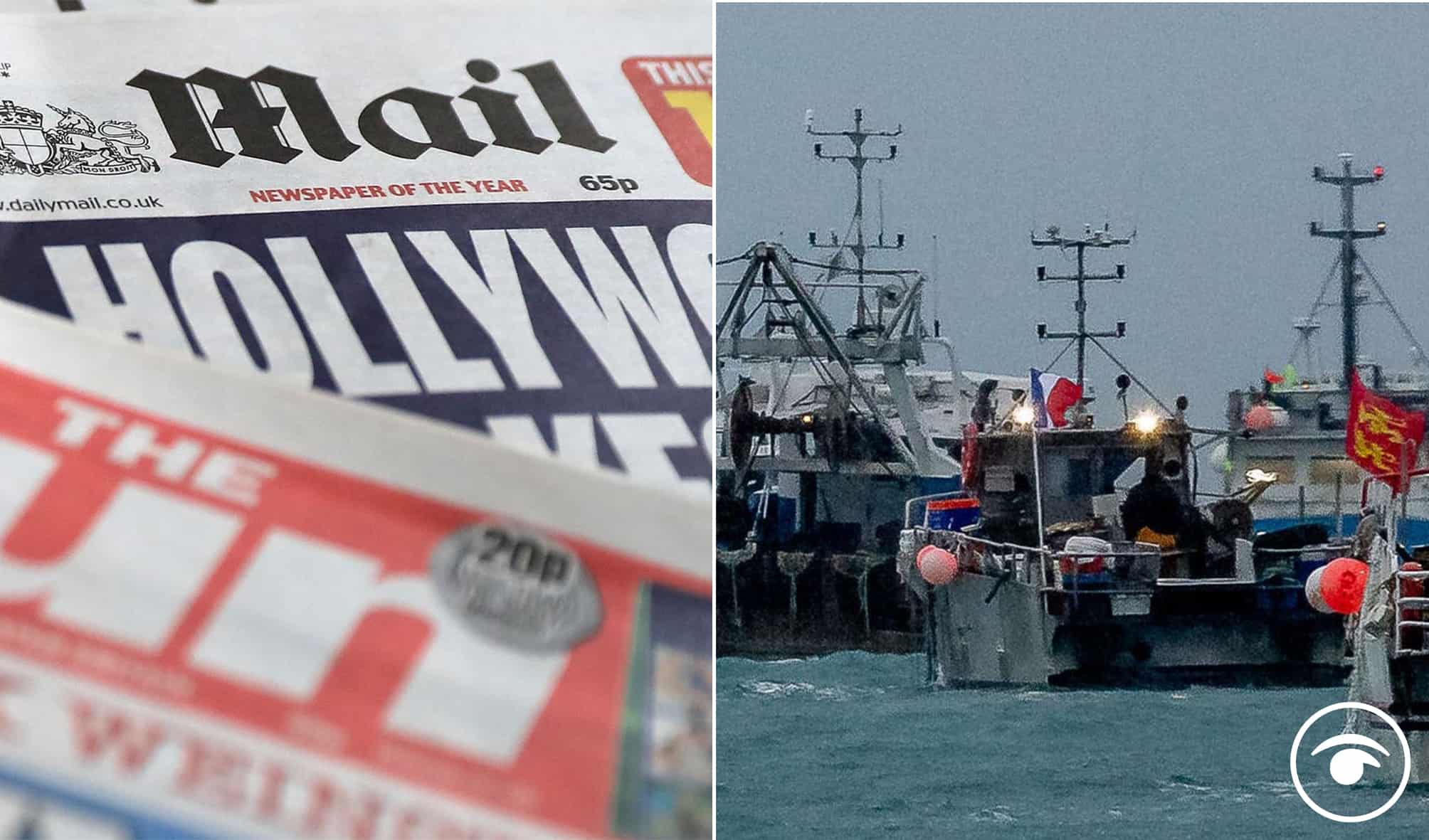 The authorities in Jersey[1] have promised further talks to help resolve the row, but the French government hit out at a “British failure” to abide by the terms of the UK-EU trade deal and warned it would “use all the leverage at our disposal” to protect the fishing industry.

The European Union also accused Jersey of breaching the deal signed by the UK and Brussels.

Communities Secretary Robert Jenrick said efforts would be made to resolve the dispute with Emmanuel Macron’s government and the EU.

“What we have done is make very clear to the French ministers who said some very unwise and disproportionate comments that we will stand with the people of Jersey,” the Cabinet minister said.

Well certain newspapers, didn’t take Bercow’s approach, and saw this argument as a great way to do a spot of warmongering with a series of jingoistic headlines.

The Sun cheers the Navy seeing off the protest around the Channel Island’s main port, St Helier, under a fish-themed headline of “Take sprat”.

Good moaning, we’ve sent them packing with their tails between
their logs…
https://t.co/DZvrHq3njl#TomorrowsPapersToday pic.twitter.com/hhaACP2B4B[8][9][10]

And Metro calls the fishing skirmish a “Smash & crab”, reporting on the “French retreat” after a British boat was rammed.

Meanwhile, The Daily Telegraph reports on the “battle of the lobster pots” but leads on the end of facemasks in classrooms.

‘End of masks in classroom as ministers defy unions’#TomorrowsPapersToday[18]

The Daily Express splashes on forecasts of a strong rebound for Britain’s economy, saying it is set to grow at its fastest rate in 70 years.

Tomorrow’s front page: That’s what you call a bounce back! #tomorrowspaperstodayhttps://t.co/B0xeeVTNx9 pic.twitter.com/8axX3xG0iG[22][23][24]

The Times leads on same story, while also reporting people younger than 40 will be offered alternatives to the AstraZeneca vaccine.

If you’re not deeply embarrassed by this nonsense, then you undoubtedly think that Boris is a top chap with your best interests at heart, that Brexit has made us the envy of the world and that DHL is repeatedly trying to deliver you a parcel. pic.twitter.com/DP77p0N4e5[29]

The Mail journalists should be required to visit the battlefields and ossuary at Verdun before using headlines like this.

I think it’s very revealing that the Star presents it in terms of a long-gone TV sitcom. It’s for people who have the narrowest of horizons and who never stir their brain cells with reality. When voters actually can’t tell the difference between real life and a sitcom, that’s bad

Strange times when the headline about Aliens being demons is the most sensible part of the front page.

Oh Christ, those front pages are just the worst. At this moment in time, with the country the way it is, I’m genuinely embarrassed to be British right now. pic.twitter.com/KAi79SDmbD[34]

It’s pretty feckin’ dumb to piss off the French, who could easily blockade the Chunnel and their Channel ports if they wanted, forcing UK to EU freight and exports to take longer, slower, lower capacity & more expensive routes! It’s not the 1800s… France isn’t our enemy… FFS!

Related: “Like one of those hostage videos” – reactions to Johnson casting vote with Carrie Symonds[37]

Since you are here

Since you are here, we wanted to ask for your help.

Journalism in Britain is under threat. The government is becoming increasingly authoritarian and our media is run by a handful of billionaires, most of whom reside overseas and all of them have strong political allegiances and financial motivations.

Our mission is to hold the powerful to account. It is vital that free media is allowed to exist to expose hypocrisy, corruption, wrongdoing and abuse of power. But we can’t do it without you.

If you can afford to contribute a small donation to the site it will help us to continue our work in the best interests of the public. We only ask you to donate what you can afford, with an option to cancel your subscription at any point.

The TLE shop is also now open, with all profits going to supporting our work.

More than 1,000 breeding pigs from a Northamptonshire farm made the 7,000-mile journey to China last week.

The pigs from Bridge House Farm, 2020 National Pig Awards Indoor Producer of the Year, were transported on behalf of Canadian breeding company Genesus, the largest independent producer of purebred swine globally, with registered populations of Landrace, Yorkshire and Duroc pigs.

A total of 1,030 purebred breeding pigs made the journey from Stansted Airport (STN) to Chengdu Shuangliu International Airport (CTU) in a Boeing 747-8F aircraft on Tuesday, April 27.

Bridge House Farm, Genesus’ first UK partner, sent it first shipment of 700 breeding pigs to China last June, the first of its scale from the UK in nearly 10 years.

In an interview for Pig World, Charlie Thompson, who is the sixth generation to run Bridge House Farm, said achieving Export Health Certification for export to China has been a long, complex process, with stringent health testing, as well as the physical logistics.

There are three isolation periods, starting with 30 days on the farm, followed by a further 30 days on a separate site before leaving the UK, then 45 days in quarantine on arrival in China.

The farm uses technology to drive breeding improvements. Pigs are weighed and electronically ID-tagged at birth, enabling extremely detailed data to be collected about the pigs from the start. A custom-made software package records the pigs’ performance, which informs what and how much they are fed based on their gender and breed.

Mr Thompson said the use of technology was integral to securing the China trade. “I would not have wanted to do everything we have done without the EID technology we have developed,” he said. 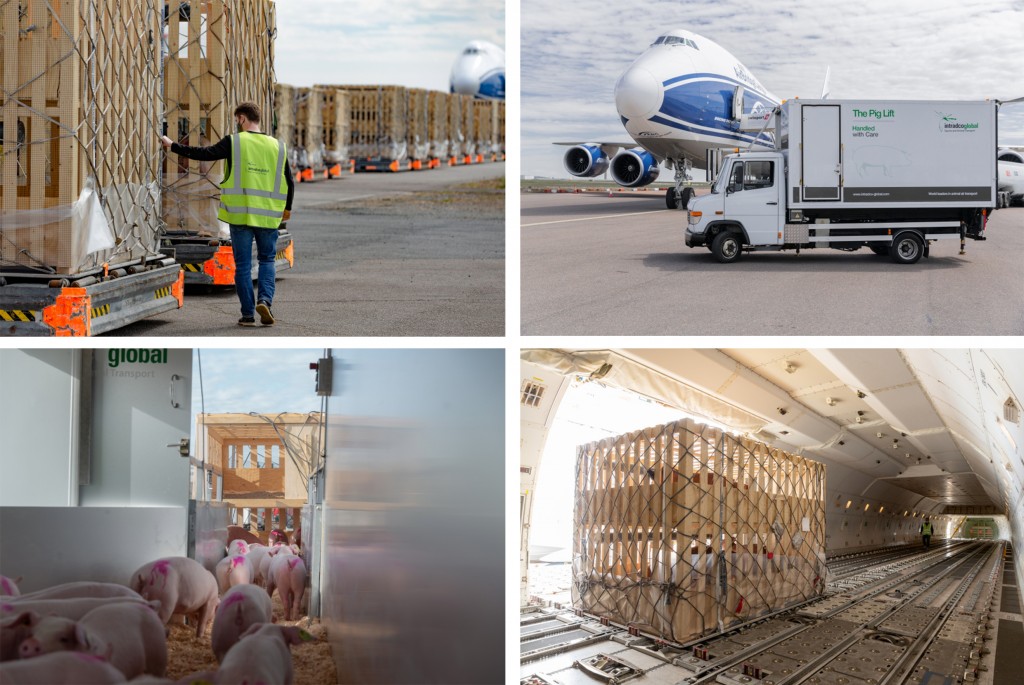 The China market has taken on added importance this year, with live exports to the EU not possible due to the new requirement for border control posts at EU ports from the start of this year. In a BBC interview earlier this year,[1] he highlighted how it was easier to send pigs to China than Europe.

Demand for breeding stock remains strong in China as it continues to rebuild its pig herd in response to its African swine fever outbreak, which is continuing to cause problems.

The 14-hour journey from the UK to China was split up with a stopover in Kazakhstan, during which the pigs had their food and water supplies freshened.

The transport, conducted by Intradco Global, saw its new Pig Lift in action for the first time. This is a truck that has been custom converted to enable the pigs to safely and comfortably move from their transport lorry to their crates.

The front and back are adjustable in height, meaning it can be tailored to suit the varying levels of both the lorry and the crates, meaning the pigs don’t have to navigate steep ramps.

While crushing can be simplified as “turning big rocks into little rocks,” the process to achieve the end result can take a number of different paths.
Stationary and mobile crushing equipment are two solutions producers can turn to. A number o…

The British government is sending two marine patrol ships to the shores of Jersey to monitor the situation after a heated debate with France over fisheries regulations in the waters of the region. The island, which has vast self-governing powers off the coast of Normandy, is not part of the United Kingdom but is one of the outermost territories of the British Crown.

The municipality of Jersey recently introduced a new fishing licensing system, citing the Brexit Trade and Cooperation Agreement (TCA). On this basis, French fishing vessels could obtain a fishing license in the area if they could demonstrate that they were active in the waters around Jersey in the past.

However, according to the French authorities, the Jersey government had not previously consulted the European Union and thus the ruling was invalid under the Technical Assistance Act.

Annick GirardanThe French government’s Minister of Maritime Affairs, in response to the heated debate, made a barely tacit indication this week that France could cut off the electricity supply to Jersey. Jersey receives 95 percent of its electricity from France on three submarine cables.

About a hundred French fishing boats were reported to have protested in the Jersey port on Thursday, although the organizers did not consider a blockade of the port. However, the British government announced on Wednesday night that two Royal Navy patrol ships would also be at the site, with the aim of monitoring a display of French fishing vessels.

The British Broadcasting Corporation (BBC) reported that London had piloted two ships called Severn (pictured) and Tamar stationed in the port of Portsmouth in southern England to the island of Jersey. The patrol class is 90.5 meters long, with artillery and short-range air defense equipment among their weapons on board.